“—-The lady doth protest too much, methinks ”

This post is NOT about Ms Mamta Banerjee , even though I did , at one stage ,  contemplate using her ” Maa/ Maatee / Manush” ( roughly translated : Mother / Earth / & People ) slogan as the title ,  till better sense prevailed . This post is NOT about  machiavellian antics of the lady who has , in the past few days , rocked the UPA II governmental boat , & hastened  processes of realignment across  political spectrum in New Delhi . NOR is this post about  decline & fall of the once frontline state of West Bengal in the Union of India . This post is most definitely NOT about her ragtag agglomeration of sycophants , ranging from a former leading light in a front- line Industry body to an erstwhile quiz master well past his best-by date . This post , I daresay with all sincerity & conviction at my command , is NOT about a nation-wide suspicion about a chemical disequilibrium in the collective wisdom  of a certain regional political party with aspirational delusions . In short , this post is NOT about anything that can get me into trouble when I visit Kolkata next . With adequately protective disclaimers in place , let me get on with what this post is about , contrary to what the opening lines & photo might inaccurately denote .

Key word in this post is  “Protest” as an interface  between People & Politics .  Argumentative that we are as a nation , we have had more than our fair share of protests in the past 12 to 18 months , culminating in an inelegent shirt-strip  brouhaha at Vigyan Bhavan New Delhi  the other day , causing visible discomfort to the Honourable PM even before he could start his inaugural address , as his security detail looked on in paralytic  inertia.

We had , in recent times, witnessed Shoe-Gate with a torn shoe ( ahh !! the prudent Indian protestor !! ) hurled at then Honourable Union Home Minister Chidambaram at a press conference ( the journo missed Chidambaram by a mile even though the latter did not duck  , unlike his predessesor in this format of protest ,  George W Bush during his final visit to Iraq as American President ) . Shoe-Gate was followed closely by what one might call Slap-Gate with Sharad Pawar , then Honourable Union Minister for Agriculture at the recieving end .  And now Shirt- Gate aimed directly at the Honourable Prime Minister . I hasten to clarify that the prefix “then” to Honourable does not denote that the aforesaid gentlemen are no longer honourable ; the connotation is with reference to ministerial portfolios held when the aforesaid protests occured. The ‘S’ centricity of these protests is quite uncanny & could , going forward , inspire a post called ” Shoe Slap & Shirt ” to displace the hitherto “S3” space- domination by late Raj Kapoor’s magnum-opus .  There I go again with my customary digression !! Getting back quickly on track , suffice it to say that these individual formats of protest carried out by deranged persons in isolation  reflect meaningless antics  underserving of more than a passing & bemused attention. That BJP , the principal opposition in Parliament , attempted to legitimise  Shirt-Gate as reflective of middle- class angst against UPA merely reflects their bankruptcy of political finesse .

Protests have been in human DNA since pre-historic times . Lord Rama , so Ramayana tells us , was banished for 14 years by his polygamous father Dashratha , following a rather unique form of protest by his step- mother Kaikayee to get her biological son Bharat designated heir-apparent in preference to her step-son & rightful next-in-line Rama. There was no counter protest by Rama nor by his biological mother , probably because they understood the futility thereof  given  Kaikayee’s bewitching control over Dashratha’s decision-making dubiousness . In Mahabharata too , crown price Bhishma was forced , in the face of an unusual protest by his prospective step-mother , into a vow of life- long celibacy to ensure not only that his in-the-womb step-brother got designated heir apparent but also that his step brother’s progeny , yet unconcieved , would be the undisputed heir-presumptive .

Oliver Cromwell’s campaign culminating in Magna Carta , after a lot of blood had been shed to nurture the foundations of the British parliamentary democracy , is an example of protests turning ugly & violent but leading eventually to a sustainable model of justice & equity.  American Civil war  &  Boston Tea Party  come in the same genre of bloodletting protests in larger long term interests .

Contrarily , India , both pre & post-independence , has  had some highly impactful defining moments in Protests , mostly peaceful & sometimes metaphorically violent (such as the innocuous shoe polish blackened face at the sublime level , or laying siege for varying lengths of time, to restrict & confine the besieged person  ( Gherao  )  at a slightly elevated level of sublimity. Laying siege through Gherao or a variant thereof in a peaceful Dharna ( literally meaning squatting ) was seldom violent & was mostly embellished with a smattering of singing “old-fasioned, foot-tapping ,hand-clapping , knee-slapping ” songs with  ‘nary-a-note-in-tune’ . Instances such as the Chaddi – Gherao ( stripped down to underwear ) siege  at movie star Dilip Kumar’s villa on Pali Hill , Mumbai to urge him to return the Nishan-e-Pakistan , Pakistan’s highest civilian honour , conferred upon him by the “enemy”  have been few , far between , & at worst amusing .

“Protest” per se is not a bad thing .  To quote Abraham Lincoln ” To sin by silence when they should protest makes cowards of men.”

However , contemporary politicians appear to lack the art of  protest with symbolism , elegance , & innovative freshness . Ironic !! Given that Mahatma Gandhi , Father of the Nation, inspired innovative forms of peaceful , non violent & impactful protest across the world but was apparently not able to pass the legacy on at home : at least not to political dispensations of our times . Ironically ,  politicians across party affiliations do invoke Gandhi’s  name perfunctorily before launching shrill , cacophonous , & boring campaigns of protest .

The 240 mile Dandi march of Gandhi in 1930 , culminated in his lifting a lump of salty mud at the sea shore to symbolise a nation’s defiance of the British Raj & with this symbolism , Gandhi ushered-in his renewed “battle of Right against Might” to “shake the foundations of the British Empire” ( quotes in Gandhi’s own words ) . Who can deny the Salt protest ( Namak Satyagraha ) its rightful place as one of most impactful mass protests in history of our nation. And, who can ever forget the emotion-charged Martin Sheen as  American journalist  Miller  in Richard Attenborough’s GANDHI , filing his report on phone of the incident at Dharasana Salt Works in dramatic telegraphic syntax : the only staccato reportage to have ever been read into official records of United States Senate

Anna Hazare did show some early signs of reinventing Gandhian art of protest & though not in the same league as Gandhi , could have offered a meaningful platform for popular protest , but for eventual & inevitable derailment of his movement from within.

“It’s funny how social activists usually protest against the only things that  have a credible chance of achieving the activists’ goals.”
Craig Bruce ( Australian TV Comedian )

Anna Hazare’s campaign for a strong legislation to curb corruption , in retrospect , suffered from its inherent weakness of piggy-backing on successful formats of protest without correspondingly nuanced focus on finesse . Hunger Strke was a direct lift from Gandhian strategy . However , Gandhi never directed his extremely potent Hunger Strikes against the British Raj nor as a tool for emotional blackmail . Most , if not all , his Hunger Strikes were directed at introspective atonement for personal failures & collective failures of his misguided followers . Gandhi’s  inherent moral authority over those he led brought them around to his ways. Neither Anna nor his key aides command the moral authority of Gandhi to carry a Hunger Strike to realms of mass remorse & course-corrections. ” I am Anna” emblazoned Gandhi Caps worn by his supporters were obviously inspired by ” We are all Khaled said”  campaign to bring to book cops responsible for killing in custody  of  Egyptian activist Khaled Mohammed Saeed as a precursor to Fgyptian Spring of 2011.  ” I am Anna” caps did for a while catch the imagination of masses in galvanising protests against institutionalised corruption . The mutation , post the split in Team Anna , to Gandhi Caps emblazoned with ” I am Arvind ” is laughable & contemptible ( no protective disclaimers needed when it comes to Arvind Kejriwal , the joker who thought he could be the King of Spades )  .

And yet , all is not lost . Whilst Political formations across party lines in Gandhi’s land appear to have forgotten the art of  peaceful yet impactful protest , the proletariat have displayed remarkable courage of conviction in recent times to protest as no one has & created impact leading up to their stated goals.

Khandwa farmers’ JAL SATYAGRAHA ( Protest in Water ) in August 2012 illustrates this. Fifty-one farmers , not led by any politician , spent 17 days immersed neck -deep in the reservoir of the Omkareshwar dam till an otherwise indifferent State Government of Madhya Pradesh was forced by power of their truthful courage to address their rehabilitation concerns ( till then neglected despite a Supreme Court direction ) .

Opponents of Kudamkulam Nuclear Power Plant tried to imitate Khandwa Jal Satyagraha by threatening to stand immersed in sea till their demands were met . Their protest however  fizzled out : perhaps because the sea , unlike a reservoir ,  has to contend with tidal ebb & flow .

I have often wondered whether  disruptive protests through  past several sessions of our Parliament could have been better & more effectively choreographed . If BJP, the principal opposition  in Parliament were to wear surgical masks & maintain pin-drop silence during parliamentary sessions , in protest against the UPA Government’s arrogance in power  , instead of disrupting proceedings with shrill , incoherent , & cacophonous sloganeering , they could perhaps have embarassed the Government & shaken its very foundations , rather like Gandhi in Dandi. Instead , they came through not exactly smelling of roses !! 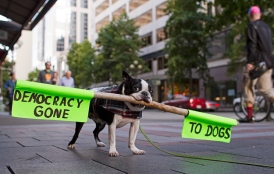 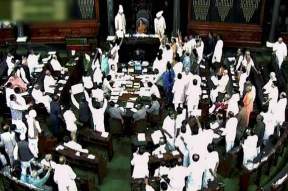 Innovative protests in this day & age of  multi & social media exposure do genrate some interesting Protest banners & signs. An innovative protest sign in this genre is from Arab spring in Egypt 2011 :

Occupy Wall Street ( OWS ) symbolising income inequalities in the “We are 99 %” slogan  has consistently produced meaningless protest signs with little or no impact . That OWS movement has survived despite absence of any focussed agenda  is quite incredible. It probably manifests an underlying frustration at societal inequity without any focussed redressal . NYPD cops continue to earn USD 56,000 per year whereas  Goldman Sach CEO continues with his USD 56,000 per day . Poor who have nothing to eat have not resorted to eating the rich. Signs with such messages  appear to have turned the movement frivolous

Protest , as the dictionary tells us , is etymologically derived from a conjunction of two words in Latin : Pro meaning  Publicly , & Testari meaning Assert . To protest or to publicly assert , one must have a subject of public interest , with larger good of the public at large as the goal post , & a well thought out strategy to reach the same , under leadership that has clarity of vision , mass appeal , & charisma to carry a campaign through .

One looks forward to a Pune-produced stereoscopic 3D animation film in mid October called Delhi Safari .  A story about a group of animals from the Borivali National Park in Mumbai :  a leopard cub named Yuvi ,  his mother Begum ,  Bajrangi the hot tempered monkey , and his anger management guru , Dr. Bagga the bear , who decide to submit a petition to the Government in Delhi  to restrain builders & developers from encroaching their natural habitat in the National Park. A protest in front of the Parliament in Delhi is the goal. The motley group includes  Alex , the parrot who can speak & understand the language of politicians in Delhi.  The movie records their journey & adventures en-route & in Delhi .

Indeed : “In such ugly times, the only true protest is beauty.”
Phil Ochs ( American Protest Singer )

70 , Mumbaikar in Gurgaon , celebrates Loneliness interspersed with occasional extended- family & old friends' reunions : all Virtual . Good Music , Single Malts & watching the world go by from his 11th floor terrace are his favorite pursuits. Also into pursuit of Safe & Secure Mid Day Meals for Primary School Children , in association with like minded individuals & institutions
View all posts by lkkanuga →
This entry was posted in Topical. Bookmark the permalink.

This site uses Akismet to reduce spam. Learn how your comment data is processed.